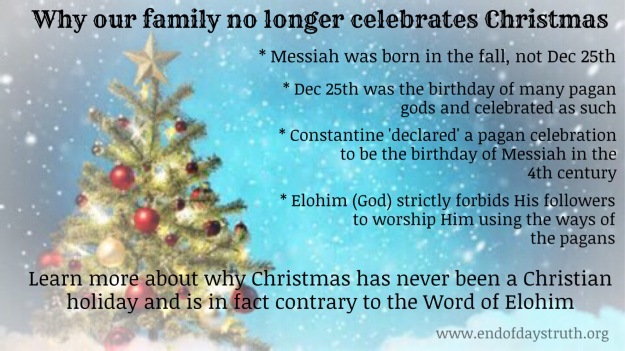 Yes, you did in fact read that correctly. Our family no longer celebrates Christmas or any pagan holiday for that matter and this series of posts will explain why. No, we have not become Seventh Day Adventist, Jehovah Witness or any other religion that we typically think of that does not celebrate holidays. We are still what the world would call Protestant Christian, but as we are learning we prefer to drop the titles and just say we are simply followers of Messiah (Jesus), the Savior and Redeemer of the world. We are in search of the pure gospel found in the Scriptures, not defiled by the evil one and/or man and aim to pattern our life after the example left by the apostles and the New Testament church. So, hold on to your hats and if you really are in search of the truth and desire to worship Elohim the way He commands us to, you will take the time to read all that will be shared here about the holiday known as Christmas. You will find what I have learned from research/study and what Elohim has to say about it through His Word.

First, I need to say that finding out the truth about Christmas was one of the hardest truths I had to accept and there have been some doozies along the way. I mean, who wants to willingly give up Christmas?? Without knowing the pagan roots and history of how it came to be, I don’t believe anyone would. I’ll admit, I went into almost a grieving stage which again has happened several times on this journey….but in order to be honest with myself, I had to ask WHY? Why was this so hard for me to think about giving up? Why did it feel like something so paramount to our human existence especially as a believer, was being ripped right out of my tightly gripped hands….although that may a bit of an exaggeration, it was really painful friends! But, as I began to learn the truth of each layer, Elohim began to change my heart with conviction from the Holy Spirit. I began not only to let the chains fall that were keeping me bound to a pagan/man-made tradition, but my spirit actually began to grieve that I ever loved something other than Elohim so much! The scripture which the Holy Spirit continues to bring to my mind when thinking on these things such as celebrating Christmas is John 4:24 which reads “God is a spirit, and they that worship him, must worship him in spirit and truth.”

This post will be written in 3 parts as there is so much information to share and it’s not an easy read, friends. This is the kind of truth that takes a while to really sink in, so I want to give you time to read and then to PRAY. I also ask for you to be a Berean and please do your own research, do not take my word for the information I present here…but dig for it yourself. Sometimes, that is what it takes for the Holy Spirit to open one’s eyes….the willingness of the person to be open to something other than what they know. Digging for the truth on your own, is simply part of the process to being open and teachable to what the Holy Spirit would have to show you. I am praying for each of you that will read this for eye salve to see and know the truth!

Before I break down each reason why Christmas is not a ‘Christian’ holiday and has nothing do to with the birth of our Messiah with historical facts and scripture, let me give you a brief summary of those points here in Part I.

So, let’s take them one at a time to understand how we have been deceived by the evil one as this holiday has nothing to do with worshiping our King.

Messiah was not born on December 25th or even in the winter, but in the Fall.

Here are just a few of the reasons we know this:

There is much more detailed research on the timing of Messiah’s birth if you wish to dig for it. I am simply presenting a high level overview of the points most commonly understood.

Messiah never tells us to celebrate His birth, but only His death and what it did for us

Below is a quote from Charles Spurgeon from 1871 on December 24th regarding ‘Christ-Mass’.

“We have no superstitious regard for times and seasons. Certainly we do not believe in the present ecclesiastical arrangement called Christmas: first, because we do not believe in the mass at all, but abhor it, whether it be said or sung in Latin or in English; and, secondly, because we find no Scriptural warrant whatever for observing any day as the birthday of the Savior; and, consequently, its observance is a superstition, because not of divine authority.”
-Charles Spurgeon, Sermon on Dec. 24, 1871

If that doesn’t speak volumes as to how we should view the day Christians call Christmas, as a superstition because there was simply no divine authority to celebrate it. If Elohim, the creator of the universe thought it important to celebrate the birth of His son, our Savior, don’t you think He would have made sure to tell us exactly when and detailed instructions on how to celebrate?

The Father was clear in Leviticus 23 when He gave instructions for His appointed times (Festivals/Feasts) that were to be observed and still should be today, as we are waiting for Messiah to fulfill the fall feasts at His return. Elohim Himself appointed His Holy Days. He did not leave this up to the authorization of man. Yes, we have liberty in Messiah with issues where scripture is silent but we do not however, have liberty to create our own feasts and/or Holidays (‘Holy Days’) as if we were the Creator, Elohim Himself.

In our family, we look to the New Testament church as our guide as from that point forward the sinfulness of man, used by the enemy has gotten in the way and the pure gospel has been polluted. So, the question for us is…did the New Testament church institute or observe the celebration or ‘Holy Day’ Christians call Christmas?  No!  The corrupt/pagan/Babylonian Roman Catholic church did in the 4th century.

To observe a man-made holiday which is said in Christianity to worship our Savior by pointing to His birth, without the authority from The Father is an attack on the sufficiency of His word..

“Beware lest there be any man that spoil you through philosophy, and vain deceit, through the traditions of men, according to the rudiments of the world, and not after Christ. Colossians 2:8

Instead, we should remember and reflect on the death of our Messiah in which we receive our redemption through His perfect blood that was shed. Our Savior is our spotless Passover lamb and He was crucified on Passover as we find in the four gospels. This is a time when we should honor our King and observe by example of Messiah, taking the bread as a symbol of His body and the cup, a symbol of His blood in remembrance of Him and what was about to take place over the course of the coming hours. We are reminded to do so by Paul in 1 Corinthians 11:23-26 and to observe this last Passover supper of our Master until He returns.

I hope you are beginning to clearly see from the historical evidence and truth of Elohim’s Word, it’s not looking too favorable for the observance of the day Christianity has deemed the birthday of Christ.

Continue with me as we break down the next two points in PART II: